3. Tree-thinking and trees as tools

Sepkoski 1978, A Kinetic Model of Phanerozoic Taxonomic Diversity I

The Geologic History of Diversity


Has diversity (the global number of species) increased through time?

- What does the evidence suggest?

- What biases exist in the data?

- Why should we expect diversity should or should increase over time?


Signor 1990, The Geologic History of Diversity


Darwin (1859) drew a tree in the Origin of Species and described how it provides a useful analogy for thinking about descent from common ancestors.

This includes identifying homologous characters (derived from a shared ancestor) and synapomorphies (derived character states). Their methods were based on Occam's raxor (parsimony).


Central to all character analyses is the necessity to identify homology: characters that are derived from the same character in a shared ancestor.


It is sometimes very difficult to infer homology. Which structures of seed plants are homologous to flowers in angiosperms? Anatomical and developmental arguments over this clouded seed plant phylogeny for decaces when morphological characters were used to infer phylogeny.

Dollo's law: complex characters, once lost, are unlikely to be regained. Not a great rule, more of a common pattern. Examples: eyes, teeth, aquatic larval stage. In general, not all traits are equally reversible in their evolution.

Character Analysis: not always that simple...


How to define independent characters? How to discretize quantitative characters?


Homologous genes: the ancestor of these gene copies was present in a common ancestor. Two distinct copies (orthologs) arose by a speciation/divergence event.

Paralogous genes: the ancestor of these gene copies was present within a lineage (e.g., species). Two distinct copies (paralogs) arose by gene (or genome) duplication. 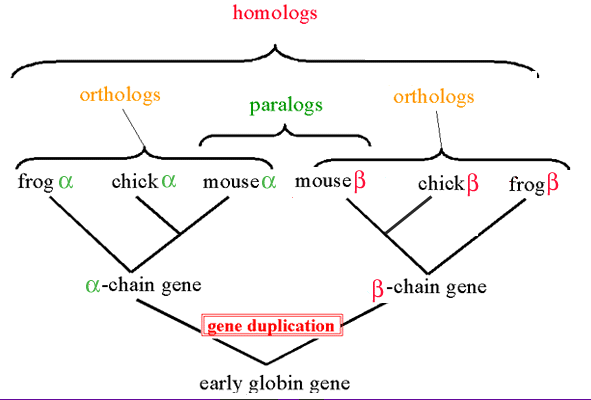 Homoplasy: independent (parallel) evolution of a character in different taxa.


Discrete data: DNA is discrete, there are only four possible states (A,C,G,T). But what about body mass, height, color, etc.

Characters weighting: Is one trait more informative than another? How to avoid biased sampling of characters?

Why not only use DNA?: For phylogenetics of extant taxa we mostly do. But morphology is still very relevant to phylogeny of extinct taxa (e.g., dinosaurs) and placing fossils with extant taxa


heritable: DNA and amino acid differences are heritable, not plastic.

homology: can be inferred by comparing sequences using alignment algorithms. The spatial location of nucleotides in the genome provides evidence of its homology.

availability and bias: Huge amounts of data are available and there is no inherent bias or expectation that certain parts of the genome (characters) should support one hypothesis more than another.


Essential to all fields of biology.

But what is a tree?


A data structure (e.g., objects and pointers), that can be used in quantitative analyses.

But what is a tree?


It can be an image, but can also be stored as text (data). The newick format stores phylogenetic trees as nested parentheses.

Reading for next week